Stay up to date

Subscribe and be the first to hear about: Sending...

Join the chatter with our Social Media channels

Please be advised at present we are experiencing additional delivery delays with carrier companies we hope to get your orders to you as possible. Thank you for your understanding and patience at the time.

A new red box dropped through my letterbox a couple of weeks ago, and it wasn't long until I just had to start it. I know a couple of other contributors have already posted their completed builds ( and very nice they are too!), but I thought I would do a blow by blow account.

A quick check of the contents revealed fine engraved panel lines, detailed cockpit and other areas, and Cartograf markings for two Royal Navy Birds from 800 NAS on Eagle and 809 NAS on Ark Royal.

The instructions are in Airfix's usual style, with red for sections just completed, and grenn for areas to be removed.

There are plenty of stencils as shown on the placement guide.

Full colour painting and marking guides for both options are included.

The kit decals are top centre, while from the spares box came the decals from the original Airfix Buccaneer S.2 are on lower right, and from the later release lower left.

I was tempted to use the South African Air Force markings, but in the end I think I will use the kit markings for 809 NAS, but with the later red/blue tactical roundels as I already have a 800 sqn kit with the red, white and blue ones.

Before starting the kit some research and reading to get into the mood took place. Phoenix Squadron tells the story of the Buccaneer overflight of Belize to prevent an invasion ( the 809 sqn machine in the kit is one of the two aircraft involved, and there are photos of her in the book). Buccaneer Boys has lots of personal stories from Bucc air and ground crew, while the Haynes Manual has lots of detail about the airframe.

The actual build starts with the cockpit and bang seats. each seat is in three parts, and while not what would be called highly details, there is some detail present, including some moulded on belts. The paint instructions all refer to Humbrol numbers, but is pretty accurate from what I can tell.

The cockpit was soon painted up and decalled (17 decals in the cockpit!), and ready to be put together. as can be seen there is also moulded on detail on the inner walls.

The inside was dry brushed with a darker grey to show some wear and tear.

The forward fuselage was then joined after adding some nose weight to prevent tail sitting.

Next will be the centre section and wings.

What sort of weights did you use? Did you get enough in the nose?

I put more weight behind the cockpit and it has worked well.

As usual PMM I will flow your excellent blow by blow build review with interest before I start my kit!!

What sort of weights did you use? Did you get enough in the nose?

I put more weight behind the cockpit and it has worked well.

I used as many small nuts and bolts as I could cram in embedded in white tack. Hopefully it will be enough or else it will be modelled with the tail hook down!

So you're not folding the wings then

I added 40g in the space where the engine would sit. 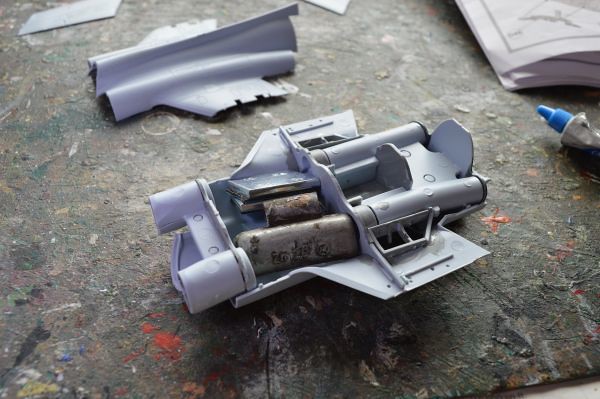 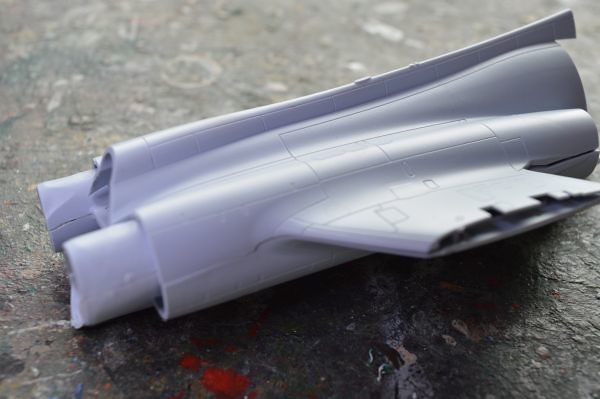 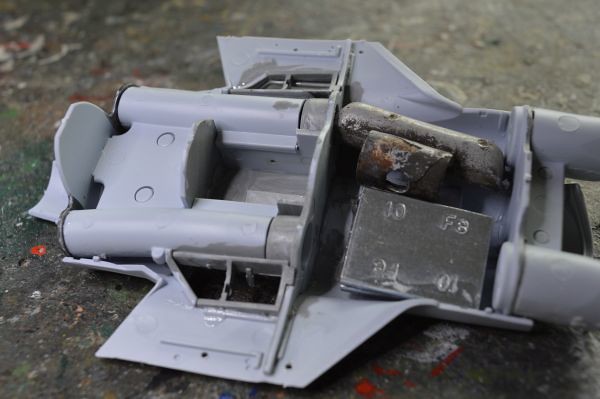 After the nose section had been completed, next up was the centre section  and wings. Ratch was correct, I am building with the wings extended. I did contemplate folding the wings, as I already have two Buccs, but the 'plane just looks better with the wings spread. Maybe the next one?

Anyway, on with the build. Before the top and bottom centre section can be joined the intakes, including undercarriage bays and jetpipes need to be constructed, painting as we go.  By the way the fit of all the parts so far has been fine, with everything clicking into place.

In keeping with the real machine the construction of the internals includes some substantial bulkheads to keep things true. Unfortunately one of the lower wings  was quite badly warped. This was only partly fixed by the triangular wing spar seen above.

In this view the very nicely detailed bomb-bay can be seen as well as the intake trunking running through the main bays.

Once all the internals are in place the upper and lower parts can be joined. The fit was good with only slight seams to be dealt with. After this the upper, outer wing sections are added, and clamped. Due to the top overlapping the lower wing section, there are no seams to sort out here. The clamping also fixed the warped lower wing. The join between the inner and outer section of the top wing left what I feel to be to greater gap, which will need sorting out later. In the picture above the nose section is only test fitted.

Now things started to proceed fairly rapidly. The nose was attached, but even with careful alignment I had iffy joins top and bottom. The tail section was then put together, with a separate rudder, end bullets to the tail-planes and top cap to the fin. There was some gaps around the top, especially around the bullets. The jet exhausts and intake fairings didn't fit to well either and some fettering was need to one of the intakes to get a good fit. At least I'm beginning to get something resembling a Buccaneer.

Here the prominent join between the centre and tail sections can be seen, as well as the jet exhaust fitting.

However it didn't take long to sort out the gaps with some Perfect Plastic Putty and wet and dry paper.

In the second picture the open air-brake is also fitted.

Talking of which, here are the parts laid out for said air-brake.

Although fiddly it went together and fitted well, just so long as the instructions are followed.

All the seams are now sorted, and the gaps along the upper wings were lessened by running some white glue into the join.

Now to add some of the smaller parts and it will be ready for painting.

I probably got enough lead in the nose (off cut of deep sea fishing weight bashed into a wedge with a hammer) but just to make sure did exactly as Rach shows and put extra weight into the void between the intakes to make sure.

I was really impressed with this one. Perfect part fit and very little ambiguity in the instructions. The kit is as solid as the real thing.

This does look like a nice kit. Would it take much to convert this kit to a South African S.50 version?

This does look like a nice kit. Would it take much to convert this kit to a South African S.50 version?

Not Really, all you would need would be the decals for the SAAF, the larger slipper wing tanks and specific South African weapons. The SAAF did have RATO in the aft of the aircraft (Rocket Assisted Take Off), but this was soon deleted, and would only need the location scribed in if you were really bothered. By the way good quality decals and the larger slipper tanks are available in the old tool Buccaneer boxing, which should be available pretty cheaply ( the red box with Desert Storm Aircraft on the top).

This guide is designed to strike a balance between the main goal of our forums (providing support for newcomers) and keeping the relaxed and welcoming atmosphere for all our users by allowing interesting and thought-provoking discussion.

We reserve the right to ban any user who violates our guidelines or disrupts our community. While we will try and offer fair warning, this may not always be possible.

Any serious complaints can be reported via the ‘Report’ button on each post, or by contacting the Forum Administrator directly at forum@hornby.com.

We reserve the right to remove or censor ANY post at our discretion. Violation of any of these rules and guidelines will result in consequences determined on a case-by-case basis.

Get all the latest Airfix news!

Explore the exciting world of aviation!

You currently have no items in your basket

Sorry, this product is only available to Club members. To find out about all of the benefits of Club membership click below.